‘Hope is a dream with its eyes open’ and so begins ‘The Greenwood Faun’, which was written in 6 months but took nearly three years to percolate, before it was published via www.EgaeusPress.com, in December. It was a pleasure to work with a publisher of such high aesthetic standards. I’m also indebted to David Tibet and Mark Valentine who have been so generous in their support. The lure of Pan, the irresistible lilt, has the same pull as rock ‘n’ roll. The leap into the ‘Greenwood’ was not quite as great as one might initially imagine. Rock ‘n’ Roll before it became an industry promised freedom & as a girl growing up in a stifling household, that was the promise. Writers shouldn’t be confined, besides I was dreamy enough to visualise Johnny Thunders as a kindred spirit to Rimbaud & to see Baudelaire’s poetic cynicism in Peter Perrett. ‘Insiders’ have never appealed, only those outside, dissident voices and themes. As we devastate nature, Pan remains in exile.

Sadly, this year saw Sheffield Council continue to decimate thousands of healthy, mature trees. Not only are they pulling out the lungs of the city & destroying the habitat of urban wildlife but they are eradicating centuries old and much loved landmarks in an unparalleled campaign of eco-vandalism. Thankfully Sheffield’s dedicated tree-guardians have ensured daily reportage and peaceful protest whilst Bianca Jagger, Vernon Kay and Ken Loach are also adding their support. My contribution, ‘Sheff,’ was illustrated by Sheffield tree activist and artist, ‘The Sad Squirrel.’  Pan is there in spirit or in the words of a branch of the same tree, Puck: ‘I came into England with Oak, Ash and Thorn, and when Oak, Ash and Thorn are gone I shall go too.’ 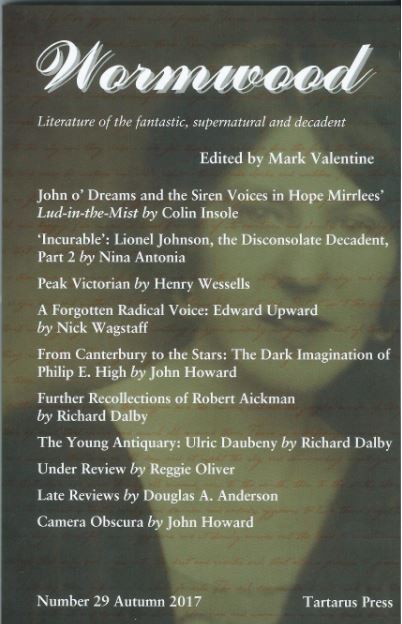 I was delighted to have a two part essay featured in Wormwood, ‘Incurable –Lionel Johnson – The Disconsolate Decadent’. Mass culture ensures only a handful of names & products are recycled like a banquet heaving with plates but only two choices on which to dine. Wormwood  (www.tartaruspress.com) however, keeps the torches burning for obscure but deserving authors of the decadent, esoteric & outré, making it a perfect home for the ‘lost’ Victorian poet, Lionel Johnson, who slipped into the literary wilderness, despite having introduced Lord Alfred Douglas to Oscar Wilde and being an influence upon W.B Yeats. It was because of Lionel that I was fortunate enough to make the cover story of ‘Fortean Times’ earlier in the year, when relaying the story of the poet’s haunted chambers, one of London’s less well known avian mysteries, that owes more than a little to Poe.

No year could be complete without a project dedicated to Johnny Thunders. I was more than happy to write liner notes & interview Michael Monroe, for a remastered edition of ‘Que Sera, Sera’, due for release via Jungle Records, (www.jungle-records.com) early in the New Year. Featuring two previously ‘lost’ tracks that are prime JT, it’s a gem.